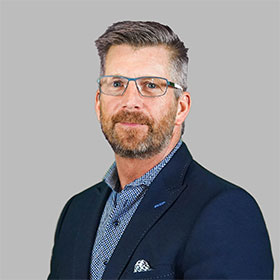 John entered the HVAC field in 1985 and holds diplomas in both HVAC Systems Design and Energy Management.

Graduating in 1988, he joined Energy Management Systems, a controls company located in Mississauga. From 1988 to 1991 John worked as a Controls Technician before assuming the position of Senior Project Manager.

In 2003 John left EMS to join Urban Mechanical as a Senior Project Manager. John worked on several large projects before being promoted to Vice President of Operations in December 2003. Responsible for all aspects of field operations, including personnel, John demonstrated his leadership and skills, resulting in his promotion to Executive Vice President in April 2005. John continued in his leadership of Urban Mechanical, developing his understanding of the industry and establishing a solid reputation with all aspects of clients.

Recognizing the need for change within the industry, John joined with Chris Nielsen and Bryon Backus to create a company whose sights were on the future, as a result, Onyx Mechanical was created.